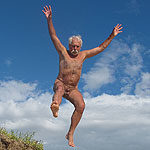 A 27-year-old sprinter who wants to represent Japan at the London Paralympic Games has stripped off for a calendar showcasing her finely-toned body -- complete with prosthetic leg.

Japanese sprinter Maya Nakanishi strikes a pose in the nude for her calendar to raise money to fund her trip to London and to buy a new artificial limb. Pic/AFP and TAKAO OCHI

Maya Nakanishi is hoping to raise money to fund her trip to London and to buy new a artificial limb.

The calendar, with pictures taken by professional photographer Takao Ochi, shows an unclothed Nakanishi striking tasteful poses that ensure just enough of her body is covered.

Nakanishi said on her official blog she hoped people would enjoy the calendar.

"I don't regret having become nude. I'm very happy that I was able to show Maya Nakanishi as I am."

In a statement, Nakanishi said she was unable to compete in the 2011 world championships due to a lack of financial resources, despite being a Japanese medal chance, and the calendar is an attempt to tackle that problem.

Nakanishi lost her right leg below the knee at the age of 21 when she was hit by a steel beam.

After the accident she was fitted with a prosthetic limb and became a sprinter. She finished fourth in the 200 metres and sixth in 100 metres in the 2008 Beijing Paralympics.